What is Super League:

Super League is WA’s club competition, where the best players from each of the 8 clubs compete. It consists of 4 rounds, followed by a finals round if your division finishes in the top 4 teams. Each round is played at a different centre on a Saturday, except for the Bunbury round which is split across a Saturday and Sunday. It’s a great way to improve your volleyball skills as we train as well as play against the states best.

All teams are 6 per side, separated into 10 divisions as follows,

Each round costs $25 per player ($100 for the whole series) as well as approximately $35 for your personalised singlet. This year we will have an option for shorts, however only the singlet is mandatory. There is no charge for the finals if your team makes it.

We provide free court hire for training as long as there is a court available and we can help facilitate games against other Super League teams. If no umpire is required and we have a court available, these games will also incur no charge. Training is to be organised by the team captain.

This year to help minimise Covid spread, each round will be split between 2 centres. The rounds and locations are as follows, 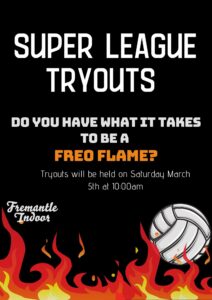